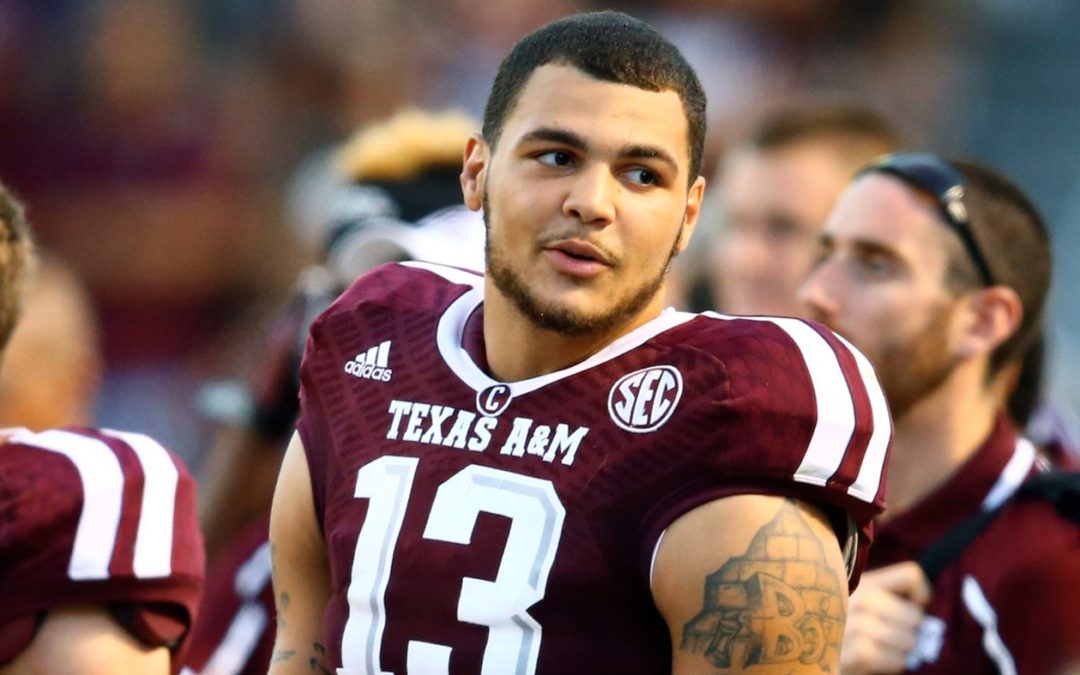 Mike Evans on TexAgs Radio from Officialize Media on Vimeo.

Key notes paraphrased from Mike Evans interview
It’s been amazing being back in Aggieland. I’ve gotten to see some people out and about and that has been fun. Certainly happy to be back, this feels like home to me.

A lot of guys in my position start their foundations, some are similar to mine, but I want to help underprivileged kids go to college. We are off to a great start so far. I want to start by focusing on kids in Galveston and Tampa and grow it out from there. Another thing is helping families impacted by domestic violence, which is near and dear to my heart. At the end of the day we just want to help people.

A few confirmed celebrities for my event: Johnny Manziel, Christine Michael, Ryan Swope and Tra Carson. (There will be) both former teammates from my time at Texas A&M and guys that I’ve met in the NFL. I’m still waiting on some more confirmations so be on the lookout. It is going to be a really big event.

I thought about doing something like this after I got to the league and realized I had the resources to do this. Growing up in Galveston we had Casey Hampton, star NFL defensive tackle coming back. I try to mimic his camp back home, free for kids to come out and have fun. I also want to expand it to College Station and Tampa at some point. I just love being able to give back and help kids.

Being compared to Randy Moss, it’s humbling for me, but I really have more to do. I’ve done some good things in the league but I know I can be better. The contract means a lot, we are on the same page. I wasn’t even worried about an extension; my agent and the Bucs got together and got it done. I want to continue to play with Jameis. I think we can be one of the best QB/WR duos in the NFL.

Last year we had a down year, so the only place to go from here is up. I think we have the pieces in place, we just have to go out there and work hard in OTAs and training camp, and I think we can have a successful season.

Seeing Johnny throw the other day, he looked good. I think he is on the right path and trying to do the right things with his life. Things happened in the past and you can’t dwell on that. It seems like has good people and his life and is getting better. I was impressed with how he performed and hopefully he can get back to the league. I know Johnny has a lot of people around him, so I just felt like I needed to be there and support him through everything. He has a lot of people in his life, so I just wanted to keep it real with him.

The Duke bowl game, we honestly didn’t take them very seriously, which I know now you can’t do that. In that game I almost got ejected. I was getting heated on the sideline because I knew it was my last game, and I wanted it to be perfect. Johnny was trying to calm me down and things escalated. That’s what quarterbacks and wide receivers do.

Jameis is one of those guys who can sit in the pocket and make every throw, but he also can lead. He’s done that since he was in college and continues to do that in the NFL. I’m really glad to have him as a teammate.

I thought Christian Kirk should absolutely continue on that first round legacy. He is probably the best guy in the country with the ball in his hands. He needs a team that will use his skill set, and I think a lot of teams will. He is way ahead of me when I was here at A&M. He is one of the best receivers in A&M history. In my opinion, it’s him and Swope who are the best.

My favorite play was the third and 19 catch against Ole Miss when we were backed up to our own goal line. Coach Kingsbury just told him to throw it up and give me a chance, and I went up and got it. I think that one kind of turned our season.

Toughest guy I faced in college, it’s hard to just pick one, but I would say David Clark out of Louisiana Tech. He did a really good job at getting in my head and he made plays on the field. He got after it so much that I wanted to fight him after the game. I made some plays in that game, but he was a really smart guy.

I’ve seen Jimbo a few times and he is awesome. I think that is one of the best hires they could have made, besides Nick Saban. I think he is a great fit for our culture.

Jameis and Jimbo won a National Championship together and did a lot of great things. I think Jimbo has a lot of swag and communicates with these kids and will be a great recruiter. Talking to some of the guys on the team, I think they really like what he is bringing.

The message is don’t give up on life. There is so much to enjoy. Family, friends and even your job. No matter what, there are people who want you to succeed and enjoy life.